5 reasons why the A$ may be close to the bottom

- In the absence of significant fiscal stimulus soon, further RBA monetary easing both in the form of rate cuts and quantitative easing point to more downside for the $A.

- However, there is good reason to believe we may be close to the low in the $A (or have already seen it): it has already had a large fall; it is just below fair value; the global economic cycle is likely to turn up next year; sentiment towards the $A is very negative; and the current account is in surplus.

For a long time, we have been bearish on the Australian dollar, seeing a fall into the high $US0.60s and revising this to around $US0.65 in May. In early October it fell to a low of $US0.6671. While negatives remain significant for the $A there is good reason to believe that we are close to the low or may have already seen it. This note looks at the main issues.

The negatives for the $A are well known

The big negative for the Australian dollar is that growth is weaker in Australia and spare capacity is much higher than in the US. For example, labour market underutilisation is 13.8% in Australia versus just 7% in the US, on the latest available data real growth in Australia is running at 1.4% year on year compared to 2% in the US and that translates to per capita GDP growth of -0.2% in Australia compared to 1.4% in the US. And the drag on growth from the housing downturn, weak consumer spending and the drought is likely to keep growth relatively weak in Australia for the next six months or so. 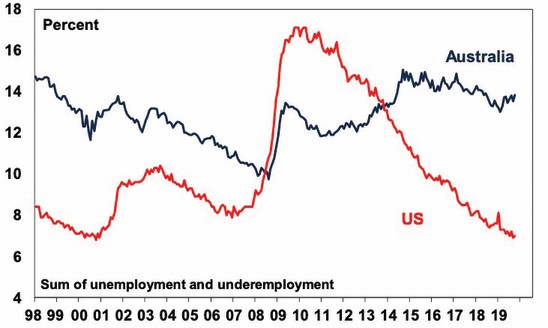 This will keep inflation lower in Australia than in the US. Ideally more fiscal stimulus is required, and the Government has brought forward infrastructure spending. But combined with extra drought assistance this only amounts to an extra 0.1% of GDP of fiscal stimulus over the next 18 months which is not enough to make a significant difference to the growth outlook. So in the absence of more significant fiscal stimulus soon, the RBA is likely to cut the cash rate further to 0.25% and undertake some quantitative easing (ie using printed money to boost growth). By contrast the Fed is at or close to the low in US rates and is unlikely to return to quantitative easing. This will continue to make it relatively less attractive to park money in Australia. As can be seen in the next chart, periods of a low and falling interest rate differential between Australia and the US usually see a low and falling $A. 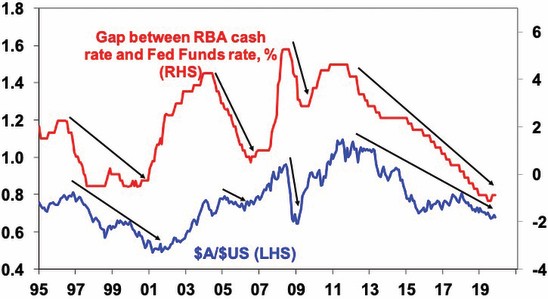 Five positives for the $A

Second, this decline has taken it to just below fair value. This contrasts to the situation back in 2011 when it was well above long-term fair value. The best guide to this is what is called purchasing power parity according to which exchange rates should equilibrate the price of a basket of goods and services across countries. Consistent with this the $A tends to move in line with relative price differentials over the long term.

The $A is "around" fair values based on relative prices 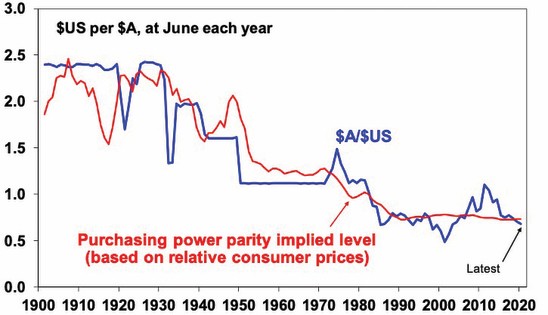 And right now, it’s just below fair value. Of course, as can be seen in the last chart, the $A could fall sharply below fair value as it tends to swing from one extreme to another. But this depends on the cyclical outlook for global growth and commodity prices. Which brings us to the next positive.

Third, the global economic and commodity price cycle is likely to turn up next year in response to global monetary easing, a bottoming in the global inventory and manufacturing cycle and a pause in President Trump’s trade wars as he re-focusses on winning the presidential election. 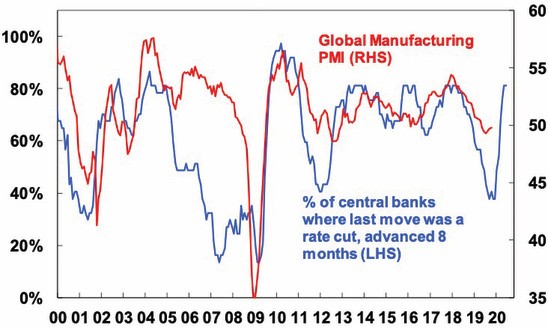 Based on historical experience, this should work against the US dollar as the US economy is less exposed to cyclical sectors than the rest of the world (which tends to see capital flow out of the US when global growth picks up and into the US when it slows). A weaker US dollar would in turn be positive for commodity prices & the $A, which is a “risk on” currency given its greater exposure to cyclical industries like raw materials. 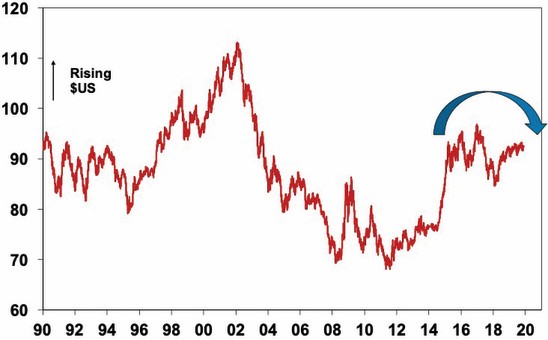 Fourth, this comes at a time when global sentiment towards the $A remains very negative as reflected in short or underweight positions in the $A being at extremes – see the next chart. In other words, many of those who want to sell the $A have already done so and this leaves it vulnerable to a rally if there is good news. 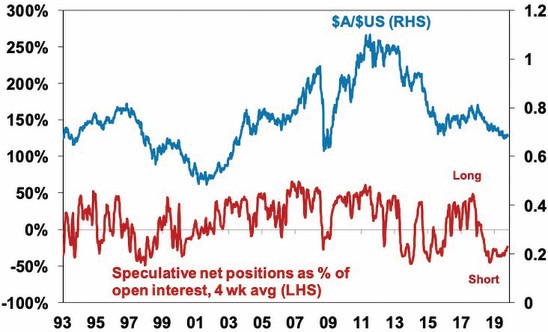 Finally, the current account has returned to surplus in Australia. The high iron ore price has helped, but so too have strong resource export volumes, services exports and a rising net equity position in Australia’s favour on the back of rising superannuation assets offshore. So the improved current account may be a permanent feature. This means less dependence on foreign capital inflows which is $A positive. 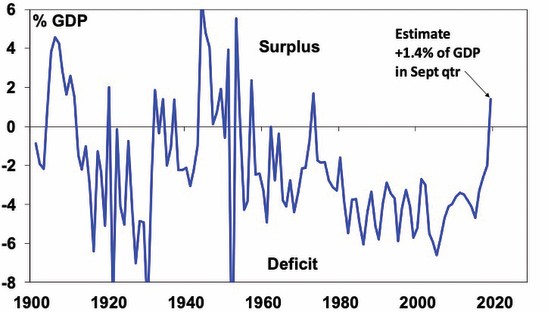 So where to from here?

The prospects for weaker growth and more monetary easing in Australia relative to the US suggests short-term downside pressure for the $A remains. But with the $A having already had a big fall to just below long term fair value, the global growth outlook likely to improve, short $A positions running high and the current account in surplus it’s likely that the $A may be close to, or may have already seen, its low. Our base remains for it to fall to around $US0.65 as the RBA continues to ease but at the end of 2020 it’s likely to be stuck around $US0.65-70 (or I’ll be honest & admit I don’t have a strong view either way!).

Of course, if the US/China trade war escalates badly again and the global economy falls apart, causing a surge in unemployment in Australia as export demand and confidence collapses and another big leg down in house prices the Aussie will fall a lot more…but that’s looking less likely.

What does it mean for investors and the RBA?

With the risks skewed towards the $A bottoming soon the case to maintain a large exposure to offshore assets that are not hedged back to Australian dollars has weakened. Of course, maintaining a position in foreign exchange for Australian-based investors against the $A provides some protection should things go wrong globally (say in relation to trade) or in Australia (say in relation to household debt).

For the RBA a shift in global forces towards being more supportive of the Australian dollar over the year ahead would complicate the RBA’s desire to boost Australian economic growth. Stronger demand for Australian exports would be positive, but upwards pressure on the $A would suggest that further monetary easing may be needed to help keep it down.